My friend and colleague Dr. med. Izabela Zitnakova recently posted an article about her experiences with the NeuroScanBalance method and me on Facebook. I think her practical experiences say more then a thousand theoretical words can do, so I decided to share them with you on this blog. Here her words:

When I first met Daniel, he was just finishing his physiotherapeutic education. Having a personal interest and enthusiasm for physical and spiritual health and their effects on human well-being, we began discussing the fascinations of the nervous system and its powerful influence over the body, organs and limbs. Daniel mentioned that he had recently been introduced to a very complex method of self-learning, involving improving and even self-healing procedures, that despite mainly focussing on the musculoskeletal system, also had ramifications for other parts of the body. This includes emotions by utilizing the advantage of the plasticity and enormous learning capacity of our nervous system. No more stretching against resistance, no more work-outs through the pain and unpleasantness, no more concepts of how something should look or be done, like conventional physiotherapy often has the tendency to. NeuroScanBalance (NSB) sounded for me like the most naturally involved method. It is simple and logical. Perhaps too simple to be believed...

Unfortunately, a short time afterwards I had an accident, breaking my ankle. Due to this I underwent two operations; the second was necessary due to some complications arising after the first one. According to the doctors and physiotherapist I had waited too long to start rehabilitation and it was thought I would need at least 20 sessions to improve foot mobility, and even then it would be unlikely for me to ever be able to move it fully. Prior to the accident I was an incredibly active and sporty person and as you can imagine my world had come crashing down.

So I started to train and took to the rehabilitation programme intensively. Every time we stretched, I was able to move my ankle a few millimetres more. At that time I was enthusiastic even though it was pretty painful. The physiotherapists also informed me that my knees were in the wrong position and I must angle them in order to maintain 3 points of contact with my feet on the floor by holding my knee outwards as this would train my muscles to correct the positioning. This did help when I was able to think and force the positioning, but when I stopped, it quickly reverted back to the way it was.

Whilst the treatment was helping, I knew it was lacking something essential. Something I was not able to define, simply something more complex.

After the second operation I met Daniel, who had become more involved in the NeuroScanBalance method, again. He was very interested in my particular problem and was keen to not only help me, but also show me, how I could help myself. It was time for me, to try something different, to break away from the current standard concepts of the world.

During the first session with Daniel I could immediately tell that something was different. It didn’t simply focus attention to the part of the body that was injured. We performed very slow movements, repeated in different variations whilst both maintaining full concentration and consciousness. Daniel was showing me a mirror of my nervous system and my whole body. I must confess that after the first hour I was pretty confused and didn’t know what to feel and think anymore. But I was feeling good, somehow free. The slow process of destroying the concepts of how my body should and shouldn’t be had begun...

The sessions were very interesting and complex, but sometimes not easy. At some sessions I had to deal with strong emotions, because of their influence over my body. We often tend to keep some positions to feel more secure, or unconsciously contract some muscles without wanting to. What I found the most exciting in this subtle work was discovering how to connect properly with parts of my body that despite knowing they were there, I had not fully been capable of feeling them before. Only when you start to feel,  you know what it is to not feel!

Through sessions with Daniel my nervous system started to activate itself, but after the session it did not stop, in fact exactly the opposite occurred! The process continued and it was just up to me to maintain control of my movements in my daily life with conscious thought and precision to prevent returning to my old routine and automatism. This didn’t just influence my body, but also somehow my perception of the inner and outer world. Nevertheless the old patterns were always coming back, my foot, back, stomach, neck, all contracting and returning to the old automatic position. But as soon as I could concentrate again, perform the movement slower, with more thought, ensuring variety and interconnection, in my mind I would be back on Daniel´s table, completing the movements clearly, painlessly and developing one step further. 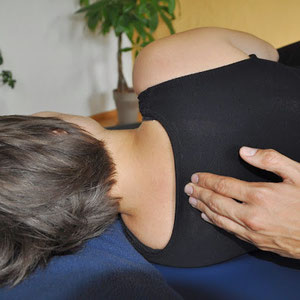 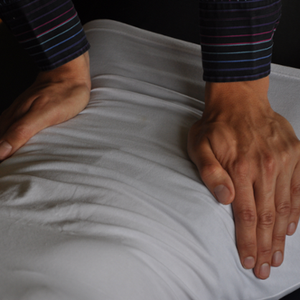 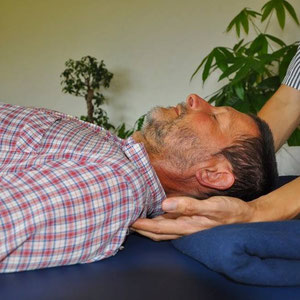 Finally I decided to plunge deeper into understanding this method. I was completely persuaded that despite its complexity it remained simple at the same time. I started to do the first basic course in Germany – Ravensburg taught by Kerstin Schmitz, who developed NSB. Every time I am there and especially afterwards I discover more and more. As a doctor, I not only find this method useful myself, but also for the patients I currently care for as well as those I will have in the future.

I am very thankful that I met Daniel, because he was the right person to show me how NSB could influence my life and the life of other people in an extremely positive way. He is an incredibly open and skilful person, with whom you quickly develop trust. This allows him to reflect an image of yourself enabling you to learn quickly and continue improving thereafter. The NeuroScanBalance method might not be for everyone, but for those who are ready to experience the consciousness of their own body and leave old concepts behind, it might bring great improvement to not only their body, but also their soul and general quality of life. Now, I can not only move my foot and body more freely, I am able to help others to do it too. NSB opened my outer and inner eyes and with continued practise I keep on developing myself more and more.

Please feel free to share your thoughts and experiences in the comments below.

Clients Experiencing NSB on this Page (German) and on herold.at(German)